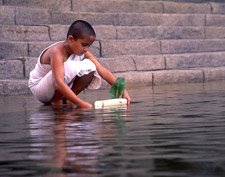 I don’t know if Deepa Mehta’s ‘Water’ has yet been released in India. In the US it has received much hype; and the film is playing in San Francisco and some theatres in the Bay Area, California, to critical acclaim. I couldn’t stand it for more than 20 minutes. And I am not an RSS activist. My contempt for such cinematic effort stems from a lack of sensitivity in filming. When its maker faced problem from Hindu activists during the shoot much was made in some quarters of India’s intolerance to freedom of expression.

It is not as if no film had been made on our socially-sanctioned cruelty to child widows. I recall a Kannada film (cannot remember the name) made over two decades ago that handled the plight of our women in such circumstances with sympathy and sensitivity. The film advocated widow remarriage at time when it was not socially fashionable to do so.

‘Water’ has high production value that facilitates a gullible audience to gloss over the film’s treatment of the theme. Deepa Metha’s ‘Water’ is pretentious. Director appears to relish dwelling on travails of a child widow, at a slow-moving pace with lingering shots of disagreeable rituals, such as shaving the head of a widowed child in exasperating detail. You don’t need to capture in close-up every movement of the barber’s razor over the scalp of a sobbing child.
Posted by GVK at 1:29 PM

The Kannada movie that you have tried to recollect is "Phaniyamma". I remember it being a very sensitive movie, too.

You will pardon me for, as usual, wanting to convert my fuller comment on this into an independent blog. I will post it later today.

This theme for "water" indeed raised the hackles of the right wingers (as they call them)for the wrong reasons. While she has every right to make the movie the way she wants, she may end up getting only critical acclaim instead of mass appeal. "Mass appeal" type of social movies (if I may use the term) tends to change people or at least change some ways of thinking. Critical acclaim is only for the technical audience and that gets a brief mention in page 3, gets it otherwise banned from screening, gets americans t pat themselves on their back for being the only civilized chaps on the planet and so on. If serious films are used a tool for changing the way society thinks, it has to be sensitised and I agree with GVK. Such films were not meant for any entertainment value in any case and should have been used to better effect. What is the purpose of just exposing, in raw, the unjustified treatment of widows in Varanasi (or anywhere else)? Would it not better served to expose, motivate and help make a change instead?

Thank you Vijendra Rao for reminding us the name of the movie Phaniyamma. I was trying to remember it for the longest time ever. I had seen it in the 80s. I must now get a copy of it and show it to my friends. If it has english subtitles, it will be really good.