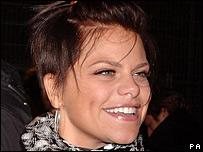 The first thing I envisioned, on reading that Jade Goody (you know her, don't you?) has been granted tourist visa to India, was a protest demo, placard waving, and slogan shouting – ‘Goody, go back’. When I shared the thought with a friend, he quipped: “Get real, yaar; she’s no Simon Commission”.

Anyway, the Goody girl’s India visit is not going to go unnoticed by our media and TV. Sight-seeing-wise Jane would, presumably, take in the TaJ Mahal,Jaipur, and Delhi (would someone take her to Rajghat and tell her about a guy called Gandhi and his S Africa days?). Maybe she would do Mumbai, to get a feel of where and how Shetty (Shilpa) lives; and drop in at a Bollywood studio. Wouldn’t be surprised if some producer offers her a film role.

The point is: Jade Goody is in for interesting times. I have a question, though. Was it her own bright idea to visit India? Going by a London sourced report, India tourism office there had invited her “to experience India’s healing nature”. There were ads. to this effect placed in British papers. But then, the report quoting ministry sources in New Delhi had that the ads., placed to take advantage of the media coverage around the Big Brother row, were meant to be ‘satirical’. Goody however was welcome, paying her own passage. Jade wouldn’t be treated as India’s official guest. Nor would a red-carpet be laid out by anyone.
Posted by GVK at 12:05 AM